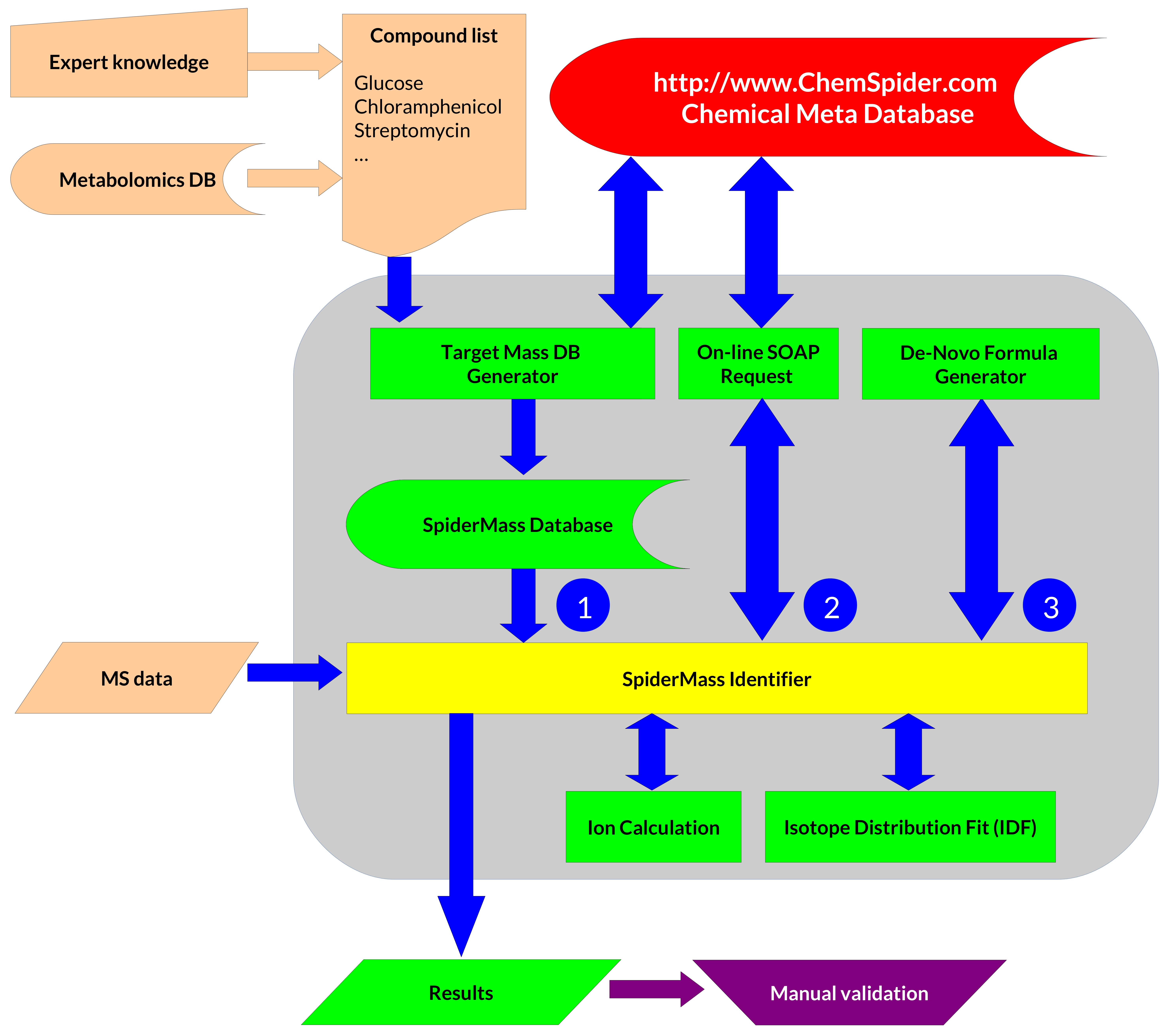 The software is a re-implementation of the "Seven Golden Rules" by Kind & Fiehn (2007) with additional features.

Identification of metabolites from mass spectrometry data is challenging. Even absolutely correct mass measurements are insufficient for the unequivocal identification of compounds, if not additional information, such as the isotope pattern, is used. Kind and Fiehn developed the Seven Golden Rules "7GR" (webpage, article), which enable the heuristic filtering of chemical formulas.

The "7GR" software is running from an EXCEL sheet, using various libraries and helper apps, which limits its use to Windows Platforms. Additionally, the installation of 7GR is sometimes bothersome. Therefore, SpiderMass was initially written as a re-implementation of the 7GR with cross-platform compatibility.

Further, some improvements were made:

The use of target databases with a collection of expected metabolites greatly enhances the chance of correct hits (see Kind & Fiehn, 2007). However, the creation of such databases can be bothersome.

Therefore, we programmed a function, which searches a given compound list (consisting of common names, CAS, sum formulas, etc. in .txt format) for corresponding entries in the ChemSpider Meta-Database and creates a so-called SpiderMass target database. This semantic database generator represents a very special feature of SpiderMass and results in drastically improved speed and selectivity of MS database searches, even for data with modest quality.

The Graphical User Interface (GUI) and most mathematical/ text/ web functions were written in Python (v3). The Python 3 OSA library is employed for SOAP requests. Time-critical operations such as the generation of chemical formula and the calculation of isotope patterns are implemented in C/C++. The programs should run/ compile on any modern computing platform. All parts are licensed as Open Source and may be modified as needed. SpiderMass was tested on Windows and Linux.

For using the ChemSpider API, a token is required, which can be obtained free of charge (academic users) after registration with RSC.

For end-users: SpiderMass is also installed on MASSyPup. You just have to place your personal ChemSpider token into the file chemspider-token.txt (located in /usr/local/spidermass/main).

I also compiled a Windows installer of SpiderMass. It was generated and tested on Windows 10, 64 bit.

Please read the Readme at https://bitbucket.org/lababi/spidermass/ :

I appreciate any comments about your experience with the program (see contact below).

Please send any questions, comments, suggestions to This email address is being protected from spambots. You need JavaScript enabled to view it..